Male and Female in the Image of God 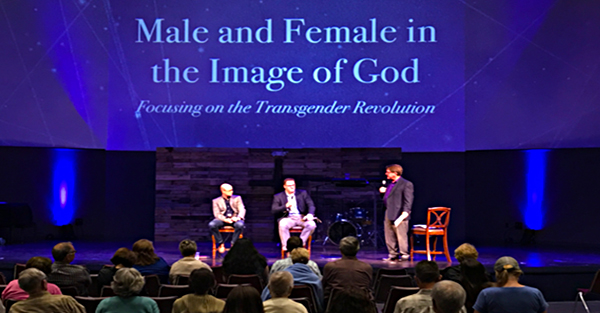 Male and Female in the Image of God: Focusing on the Transgender Revolution

On April 21 and April 22, Denton Bible Church welcomed Denny Burk and Andrew Walker of the Council on Biblical Manhood and Womanhood for their regional conference: Male and Female in the Image of God. Denny Burk and Andrew Walker taught on the issue of Transgenderism and what it means to be made in God’s image. Audio and Video files of the talk can be found on the DBC Media Website under Extra Messages.

Transgenderism presents a pressing challenge to what Christianity has always taught about God’s image-bearers. It is a direct challenge to biblical authority and is an open contradiction of the Bible’s message about male and female. Faithful Christians will have to understand these challenges before they can answer them with gospel faithfulness.

Amidst the cultural and political debates around transgenderism, individuals who suffer from gender dysphoria get caught in the crossfire. The church’s response to the transgender revolution requires us to be a community that practices both conviction and compassion to troubled souls who find themselves in a Genesis 3 world.

Denny Burk is the President of The Council on Biblical Manhood and Womanhood. He also serves as a Professor of Biblical Studies at Boyce College, the undergraduate school of the Southern Baptist Theological Seminary in Louisville, Kentucky. His recent books include, What is the Meaning of Sex? and Transforming Homosexuality.  He blogs at DennyBurk.com.

Andrew T. Walker serves as the Director of Policy Studies for the Ethics & Religious Liberty Commission of the Southern Baptist Convention. He is an M.Div graduate of Southern Seminary and is currently a doctoral student in Ethics and Public Policy at Southern. His most recent book is Marriage is: How Marriage Transforms Society and Cultivates Human Flourishing. He blogs at AndrewTWalker.com.

Both speakers co-authored a recent article on the transgender revolution at Public Discourse which is an on-line publication of the Witherspoon Institute.  In their article, National Geographic’s “Gender Revolution”: Bad Argument and Biased Ideology, they offer a very thoughtful and biblically grounded response to  the January 2017 issue of National Geographic magazine that was entirely devoted to advancing the normalization of transgenderism.

The Council on Biblical Manhood and Womanhood: http://cbmw.org/

Note that we moderate all comments, so while some may not be published we do read and appreciate all feedback.